We’re building an A Voice Coming From Then tour of Wales this Autumn, with events already planned at several libraries, independent bookshops and Waterstones stores across Wales this October and November.

If you run a bookshop, library, arts venue or poetry night, then please get in touch with us on outreach@arachnepress.com and let us know if you’d be interested in hosting an event with Jeremy Dixon as a part of this tour.

If you’re in Wales (or close by) and would like to see Jeremy reading from A Voice Coming From Then, please keep an eye on our blog and social media channels for the event dates and locations – coming soon!

For now, we are celebrating A Voice Coming From Then‘s book birthday with an online offer: buy a copy of the print book from our webshop and we’ll send you a code for 50% off the ebook or audiobook, which is beautifully narrated by Nigel Pilkington.

A Voice Coming From Then starts with Jeremy Dixon’s teenage suicide attempt and expands to encompass themes of bullying, queerphobia, acceptance and support.

As well as exploring identity, the tragic effects of bullying and the impact of suicide, this collection also includes unexpected typography, collage, humour, magic, discotheques and frequent appearances from the Victorian demon, Spring-heeled Jack.

One of the Wales Book of the Year judges commented: “I really admire Jeremy’s ability to be so vulnerable. I felt like he just really put his heart and his whole self into the collection.” Congratulations to Jeremy on having this immensely personal and moving collection out in the world for a whole year.

It’s Independent Bookshop Week! The annual Bookseller’s Association celebration of indy bookshops and all they do to keep the UK book trade diverse, eclectic and engaged with local communities.

As an Independent Publisher we LOVE indy bookshops and spend a lot of our time getting to know booksellers and planning events, but because most of our titles are ordered through a central distributor, we often don’t know exactly which books end up in which bookshops.

So, this Independent Bookshop week, we’d love to see your pictures of Arachne Press titles on the shelves of independent bookshops!

Tweet them to us at @ArachnePress and we’ll share them, giving the books, authors and bookshops all a moment in the spotlight.

Photos are very welcome from booksellers too and bonus points for anyone who tweets us with a new Arachne purchase, supporting a local, independent bookshop.

We’ve got lots to celebrate in the next seven days; as well as Independent Bookshop week, it’s also publication week for Paper Crusade – Michelle Penn’s startling re-imagining of The Tempest, which is something quite special.

If you’re an independent bookseller who has just received stock of this title (or would like to!) then please let us know.

Solstice Shorts – our annual celebration of original poetry, stories and music for the shortest day – is rapidly approaching. We asked Solstice regular, poet and writer Rob Walton to share some memories of the festival, and accompanying anthologies, from years gone by. This year’s theme is Words from the Brink – writing and music in response to the climate crisis.

Rob Walton: I count myself lucky to have been included in more than one of the Solstice Shorts books, and fortunate indeed to have had my work performed/read by others. It was a great thrill to hear ‘Words on Paper’, a story of which I’m very fond, read aloud in Carlisle. It’s a story that’s close to my heart, and I’m chuffed it was recorded for posterity and also appeared in print.

I’ve definitely enjoyed seeing some of my more, er interesting pieces reach a range of audiences – I wonder what the crowds (I’m guessing) in Lisbon and Maryport made of ‘The Dowager Duchess of Berwick-upon-Tweed May or May Be Bottling It’? I’ve written micro-fictions shorter than that title!

This year’s offering, ‘Mr King Has Decided to Pursue Other Avenues’, is inspired by a long-standing commitment to environmental change and, possibly, that time I had to leave my primary school class behind on the beach trip when I was stung by a weaver fish. These things stay lodged somewhere and appear, transformed, years later…

Read an extract from ‘Mr King Has Decided to Pursue Other Avenues’:

It was a liberal and progressive school – some would say slack and lackadaisical – and when Mr King said he wanted to stay at the beach at the end of the trip, they wished him well and happily set off without him. It was almost time for the long holiday, and when he wasn’t there to take registration the following morning they arranged temporary cover, and later replaced him with somebody younger with a similar name and the same tattooist. (Mr Prince would be pleased to get the job because Hokusai’s expertly inked The Great Wave off Kanagawa, which covered all of his back, had been very expensive. And quite painful. Also, he knew it would be a star turn on a staff night out.

Words from the Brink is available to pre-order from our online shop.

Buy your tickets for Solstice Shorts 2021 on Eventbrite.

Our Jolabokaflod 2021 offering:  buy a second (roughly) half-price copy of the same book. Applies to any book with a cover price of £9.99 or less, until 17th December, last 2nd class posting day for Christmas.

The Icelandic tradition of giving books on Christmas Eve and staying up all nights reading (with optional vat of hot chocolate) is known as Jolabokaflod – literally, Yule Book Flood.

We’d like to encourage this tradition, so this year, we are offering a discount on second copies of the same book. When you order, ask for 1 copy, and add the Jolabokaflod ‘product’ for £5, and we’ll send you 2 copies. This can be used once for each full-price title you order.

For example: you order a copy of What Meets the Eye? and a copy of Words from the Brink, and you want 2 copies of each, you order 2 Jolabokaflod

Or: you buy 2 full price copies of Where We Find Ourselves, [BACK IN STOCK!] and order 2 Jolabokaflod, and we send you 4 copies.

If you would like us to send your second copy direct to its recipient, perhaps with a message, let us know.

There are undoubtedly simpler ways of doing this, but they require an upgrade of our systems and we haven’t the time or money for it.

We’ve extended our summer sale to the end of August!

30% off backlist short story titles with a minimum spend of £10.

One of my favourite moments in the publishing process, arrival of the first batch of books.

These will be going out to the author, Rob Walton, reviewers, and people who place pre-orders with us. You can do that in our webshop. If you want to buy it elsewhere you’ll have to wait until the end of March.

We first spotted Rob’s lockdown poems on his social media, because we follow him as we publishing several of his stories, and a couple of poems, in earlier anthologies.

After reading the first few aloud to my wife, I thought, this has to be dealt with, and enquired over the number of extant poems and how the creative splurge was going, and made an offer. A doesn’t remember all our author’s names, so when I told her we were going to do the book and she said who? my response was ‘What did you do on your first day back , darling? /Lick Yusuf. (1st June) and she knew immediately.

Then Rob went quiet on me, and on social media, and a tentative email revealed a covid related bereavement, shielding and a blaze of more poetry.

The light-hearted, funny and furiously angry observations of how life is lived in the Covid world remain, alongside the personal grief at how lives are also lost.

If you or the person you are buying for are in SE4 or SE23 we will hand deliver you book with a message optional gift wrap up to Christmas eve. Just not on Monday, as I will be fretting over the festival then.

A long, thoughtful and very enthusisatic review from Damien B Donnelly

The collection cleverly deceives the reader with its light appearance; delicate forms of short poems with few words but that too is its strength, like a language not used enough so that words are forgotten and we must cut to the truth without the fluff and frills.

Following on from Dawn Dumont’s quote at the beginning of the poem One Name, Cymru- to be born indigenous is to be born an activist- we realise that the fight is happening here, within the considered calls rising up from these carefully chosen lines, each word perfectly formed into a sense of identity often bashed, often silenced but ever resilient. 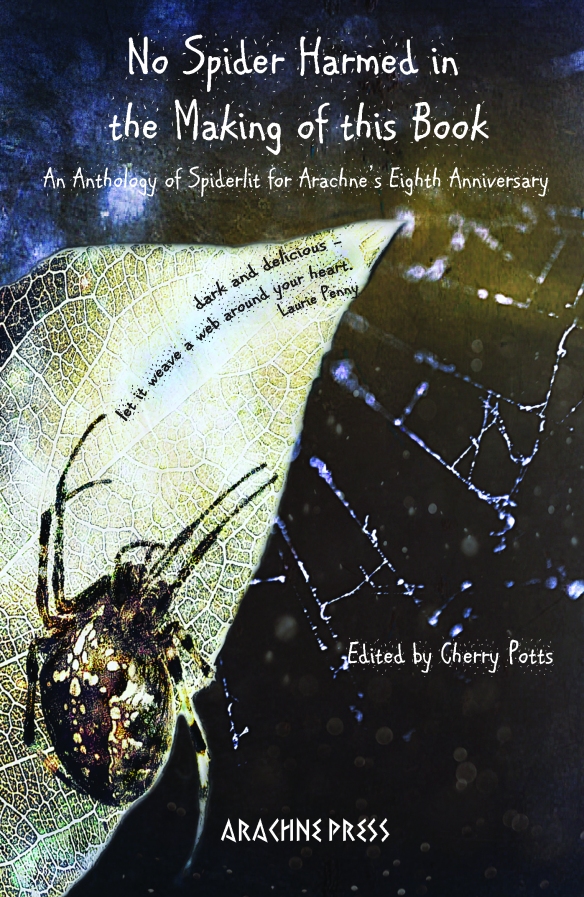 Review of No Spider Harmed on Blue Nib

an appreciative review from Chloe Jacques

Pieces in the collection rarely seek to impose an anthropomorphized interior experience onto their spiders, and the anthology is filled with musings and suggestions that speak both to things shared between humans and spiders, and to the ultimate mystery of a spider’s inner-world.

The myriad voices in the collection – and the many ways they have interpreted the call for submissions – make for a stimulating read, at once serious and moving, as well as light-hearted and frivolous.

This collection is a refreshing, detailed and compassionate take on an under-loved and fascinating creature.

I’m almost as excited by the bilingual boxes from TJ Books as I am but the GORGEOUS cover by Kevin Threlfall.

Get your order in now for delivery pre-publication. free ticket to the festival with every order received before 17th December.

Lockdown is just round the corner, and with it, your local indie bookshop will be closing. How will you cope? ESPECIALLY if you haven’t done your christmas shopping yet? (I feel like this list should be illustrated by Tom Gauld)

Our favourite bookshops… we highly recommend you run here and pile high: Gay’s the Word, Lighthouse, Housmans, Bookseller Crow on the Hill, Review, to name but a very few.

2 Use you local Bookshop’s website to order. (Highly Recommended)

3 Oh NO! your local bookshop doesn’t have a website (yet)? Order direct from the Publisher, especially if they are an independent – they too will suffer from bookshops being closed! Hint, our webshop is here (Highly Recommended!)

4 Still no joy? Head over to Bookshop.org where every sale supports independent bookshops, and you can choose which bookshop gets a cut of the cover price, if you want to, otherwise it’s shared equally between all the participating bookshops. (And if you CLICK this particular link (here it is again, Bookshop.org) we get a tiny referal fee too! You’ll land on our page, where amongst other things, there is list of books we recommend for writers, and a list of some of the other books written by our authors. You can skip off and search for other books elsewhere, and we still get a tiny thankyou from Bookshop, so you know, everybody wins. (Highly Recommended)

5 Want to support global conglomerates that have poor records of staff management and tax paying? Just so you get the book cheaper? …What are you doing on our website?