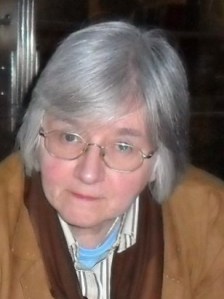 Sarah Lawson was born in Indiana and educated at Indiana University and Glasgow University, but has lived in London since before decimalisation. Her poems, translations, and book reviews have been published widely. Her translation of Christine de Pisan’s Treasure of the City of Ladies (1406) was its first English translation (Penguin Classics). Her translation of Moratín’s El sí de las niñas was performed at the Prince Theatre in Greenwich, and her own play, ‘Gertrude, Queen of Denmark’, a feminist take on Hamlet, was performed at the Lion and Unicorn in Kentish Town. Her poetry collections are Below the Surface (Loxwood Stoneleigh, 1996) and All the Tea in China (Hearing Eye, 2005); Hearing Eye has also published her pamphlets, Twelve Scenes of Malta and Friends in the Country, and a haiku collection, The Wisteria’s Children (2009).

Sarah describes her poem for The Other Side of Sleep, Revenant,  as a memory laid down by a child revisited by the adult, who now identifies with the adults in the memory and wishes she could reassure them that their difficult decisions were the right ones.

Sarah is one of six poets featured in Vindication.

Sarah also has a short story in Departures and a peoms, Ms Muffitt Considers Her Options, in No Spider Harmed in the Making of this Book

Preorder No Spider Harmed… – out 8th August 2020 for our eighth anniversary!