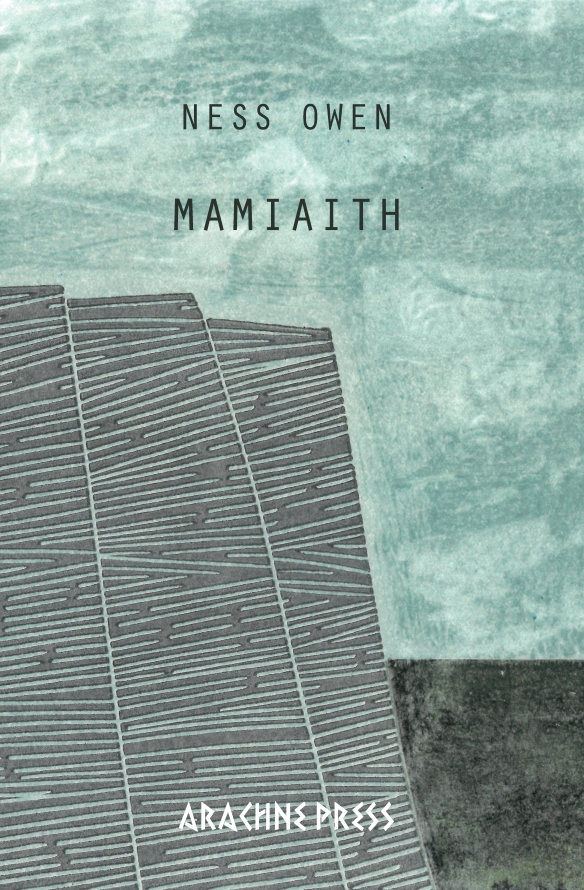 Ness Owen lives on Ynys Môn off the North Wales coast. This is her first collection, and is partly bilingual. The poems journey widely from family and motherhood, to politics, place and belonging: an underlying connection to the earth of Ness’ home, that feeds a longing/desire/determination to write in the Mamiaith (Mother tongue) that she speaks, but did not learn to write fluently. The interplay of languages and the shifts of meaning from one to the other feed the musicality of the poems.

The majority of the poems are in English, five have been additionally translated into Welsh (with help from Sian Northey) one was written in Welsh and translated into English by Ness.

Fabulous Review on Eat the Storms : The collection cleverly deceives the reader with its light appearance; delicate forms of short poems with few words but that too is its strength, like a language not used enough so that words are forgotten and we must cut to the truth without the fluff and frills.

Spare, needle sharp but threaded through with love of country, language, people, past and future, this profoundly political collection stitches us into a rich tapestry. ‘….silence won’t shape our future… march where you’re standing…’ Owen exhorts. Tough though her message often is, she bends and weaves language lyrically, like a basket holding  ‘…fragments… earth scented, dropped, lost, broken…’ but for change to happen we must first learn how to begin, ‘to dance an inner smile.’

I seem to have been waiting a long time for the voice of a poet such as Ness Owen to burst on to the scene . Her poems lash with life in language that is both luminous and exhilarating.  She explores the quirks and enrichment of two languages which sometimes collide or countershade one another. Taut and tender, her meditations make these poems  ‘sing’ for  ‘canu’ in Welsh has long been the yardstick of a true poet. These poems linger in the mind long after the closing of this book.  At last, a poet who dares to embrace with a sense of wonder the two languages of Wales with poems that pulsate on the page. A truly magnificent debut.

Mamiaith is a glorious protest of poems marching determinedly into Cymru’s future with the banner of Cymraeg waving proudly at the fore. The politicking that has fractured Cymru’s communities, and that continues to strip socialist roots from Wales, is documented here through words that are unafraid to challenge the dismantling of Cymru’s heart and soul. Through these poems Ness Owen unapologetically adds her voice to the demand for the indigenous Mamiaith (mothertongue) be given her rightful place in modern Wales and, following Owen’s journey, the reader can only feel a sense of pride that she has found her bilingual song and refuses to be silenced. Infused with the words: Regret in any language looks much the same, Owen claims her heritage through this process of writerly empowerment, encouraging the reader to break their own chains of reticence and decide exactly what they stand for. This collection is a call-to-arms where the personal becomes political: Zero tolerance / time to gather our stories / together voices will be heard. It is an appeal to celebrate our differences, and to not fear embracing the international community: Heddwch drwy gydymdrech / heddwch i fyd cyfan. Peace through solidarity / peace to the whole world. How do we approach such a seemingly enormous task? We follow the poet’s final words as we close this most enthralling book of poems and step back out into the world: begin with fearlessness.

As co-editor of ‘Red Poets’ magazine I’ve had the pleasure of publishing Ness Owen’s poetry for a number of years and this collection merely confirms my admiration. Her politics is always subtle, her proximity to the natural world and Welsh language vital.

Mamiaith is the impressive debut collection of a poet already finding her stride. Her poems are testament to what can be stolen – language, land, selfhood – but the act of writing becomes an empowerment, resistance against life-denying forces. These are poems wrought by an Anglesey woman grappling with her inheritance of a broken mother-tongue that’s made her ‘tongue-tied’ in written Welsh – yet the poems, both Welsh and English language, serve as shoots of green, the triumph of poesis, attending to what was broken, mending from the past’s pieces. The poems also join a chorus of like minds, adding their voices to sing of women down the ages, an ‘appeal’ for a future ‘full of/hope’. Owen’s ‘female blackbird’ seeks voice, to sing ‘not/just with throat but/wings and tail’ so as to find ‘the one note/to stop them still’. Quietly but firmly, in poems that are spare, incisive and vibrant, Owen, in making a stand, joins the march, inviting us all along too: ‘(Sing) You can’t turn back/Only walk forward’.

Ness Owen’s poems have an insistent, pent-up energy, gaining friction and purpose from the struggle to be heard – a struggle intensified by the knowledge of silenced voices and silenced language. The ethical urgency of holding her ground comes partly from the tension of a bilingual culture, but it is also a determination to stand with her island locality, Ynys Môn, its rich ecosystem, history and communities caught in the lyrical pull of memory. More broadly, these poems articulate the challenges facing contemporary Wales, from zero-hour contracts to the proposed dumping of nuclear waste. Against darkness, the poet, like the blackbird she describes, defiantly turns up the volume of her song: ‘still you sing not / just with throat but / wings and tail forcing / out your voice’. These are poems that sing for all they’re worth.