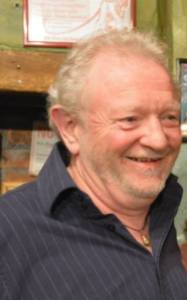 Neil Brosnan features in the second Solstice Shorts Festival, Longest Night, and his story Dancing to Silence, in which a woman wakes alone in the night hung over and full of regret, is in the Shortest Day, Longest Night anthology,

Neil’s stories have appeared in magazines, anthologies, and in electronic format throughout Ireland, Britain, and the USA. A former winner of The Bryan MacMahon, and Ireland’s Own short story awards, he is the author of two short story collections: ‘Fresh Water & other stories’ (Original Writing, 2010) and ‘Neap Tide & other stories’ (New Binary Press, 2013)

Neil Brosnan has lived in his native Listowel, Eire and appropriately for someone involved in Solstice Shorts, his world is one of traditional Irish music, song and dance: his father, Tim, was a renowned accordion player and set dancer, while no session in the Brosnan household was complete without a song from Neil’s mother, Kitty (née Galvin).

Neil now writes and performs his own work alongside traditional music. Frustratingly, he can’t join us for the festival, otherwise we’d rope him in to sing too.

d, r, m, f, s, l, t… Yes, there are only seven notes; yet, no piece of music – from the great classics to the weirdest of cult forms – contains anything other than those seven notes. As a songwriter, I fully appreciate how fortunate poets and fiction writers are compared to composers, not only do we have twenty-six letters to work with, but evolution has done us the favour of moulding infinite combinations of those letters together – all we have to do is place the resulting words in the order of our choice.