Occasionally we ask our writers what they are up to out in the wider world, so here’s an update of excitements and triumphs from Arachne authors and poets around the world.

Andrew Blackman (Stations) is having a short story Boy, Dog, Accordion published in a pocket-sized book by In Short Publishing in Australia early next year.

Brian Johnstone (The Other Side of Sleep, Liberty Tales) has recently had a poem installed on the Corbenic Poetry Path in Highland Perthshire. The poem, ‘How the Mire Thaws’ – from his 2004 pamphlet Homing – was selected by curator Jon Plunkett for a recent extension to the path also featuring poems by Kathleen Jamie, John Glenday and Alec Finlay. The Corbenic Poetry Path is situated on the banks of the River Braan near Dunkeld. It is roughly 3.5 kilometres long and takes in woodland of various sorts, open moorland, field borders and riverbank. Access to it is open to all and is completely free. For more information see: http://www.corbenicpoetrypath.com/

David Mathews (Solstice Shorts, Liberty Tales, Shortest Day, Longest Night) has, finally, a WEBSITE. www.davidmathewsstories.com  where people can catch up with his literary happenings, read a few of stories and sign up for a brand new monthly story, starting 13 November – on the theme of coffee for the first few months.

j.lewis (The Other Side of Sleep) had a book of poetry/photography published this year http://www.egjpress.org/collections/featured/products/a-clear-day-in-october

Kate Foley (The Other Side of Sleep, Liberty Tales, The Don’t Touch Garden) has had her collected poems Electric Psalms published by Shoestring Press

Lennart Lundh (The Other Side of Sleep) has taken part in three poetry month projects, been part of seventeen open mics, and was a featured reader a baker’s dozen times. One book of short stories, Antique Shopping, was published in October. The poetry collections Poems Against Cancer 2016 (Len’s annual April fundraiser for research into children’s cancers), The Bear Whispers in the Night (August), and Jazz Me (September) also made their appearances.

Liam Hogan (London Lies, Happy Ending NOT Guaranteed) has one three (THREE!) prizes this year, Quantum Shorts 2015 in April and Sci-Fest LA’s Roswell Award 2016 (May), and Worthing WOW YA fiction prize (June) and a 2nd place in On The Premises Darkness contest, (October) for Bring Rope.

p.a.morbid (The Other Side of Sleep) has 2 chapbooks out this year, and a solo exhibition….

Peng Shepherd (Weird Lies) has signed with Curtis Brown agents, and has a book deal with Harper Collins for her debut novel M

Pippa Gladhill (Solstice Shorts, Shortest Day, Longest Night)  had her play CITY performed in Faversham Kent in August this year. It will be produced in Bristol in 2017, date to be confirmed, and there is a possibility of more in Swindon and London.

Sarah Lawson (The Other Side of Sleep) has had a poem Coming Home in the Fog in South Bank Poetry in September, a poem When Does the Beginning Begin? in The Interpreter’s House in October, and six poems imminently forthcoming in Raceme. A later issue of Raceme is to contain two of Sarah’s translations of the Spanish poet, Luis Cernuda (1902-1963).

Wendy Gill (Stations, Shortest Day, Longest Night) had her musical That Man showcased at The London Hippodrome in September, supported by the Arts Council.It was a great success with a brilliant cast, with people from shows like Wicked and Lion King. 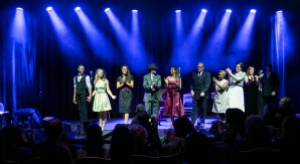 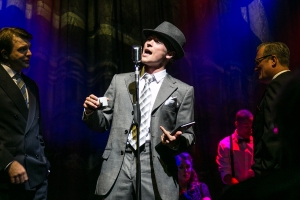 Here are video snippets from the two stories from Lovers’ Lies read at our Other Worlds event on Sunday – part of the Brockley Max festival hosted by our friends at Misty Moon Gallery.

This Isn’t Heat by Richard Smyth, read by Silas Hawkins, in which the Buddha interferes in James Mercury’s life when the air conditioning breaks down.

Surf & Turf by Mi L Holliday, read by Sean Patterson, in which a goldfish comes to the aid of her lonely owner.

As part of the Brockley Max festival, we are reading at Misty Moon Gallery, behind Ladywell Tavern, 80 Ladywell Road SE13 7HS, 7pm 1st June at 7pm.

We were rifling or is that riffling*? through Lovers’ Lies and (Award WINNING) Weird Lies for stories as yet unread to a live audience, and look what we found!

Weird dreams that might become real, loneliness-eating goldfish , gravity-challenged adolescents, a modern take on The Flying Dutchman, Buddha interferes when the air-con breaks down, and (not in either book, but just for fun) a fairground exhibit answering back.

find out more about the readers

Can’t wait til the 1st June for your fix of live science fiction? come to The Story Sessions on Wednesday 21st May as well! Different stories and mostly different writers, but the same weird stuff.

*The spell check doesn’t like it, but it’s what you do with books isn’t it: riffle – as in to flick rapidly but gently through the pages… word of the day!

Many of our authors are in other parts of the globe, so I’ve been getting on the phone, or sending questions to local interviewers so that you can get to hear their voices. Here’s the first of these: Mi L Holliday, author of the lovely Surf & Turf from Lovers’ Lies, who is currently in Japan.