Rebecca Skipwith reads her short story, Surplus Women, set just after the end of WWI, from our anthology An Outbreak of Peace, read at Writing the Past, our event for Hither Green Festival 2019 at Manor House Library.

Math Jones kicks off our Writing the Past event for Hither Green Festival representing the 17th Century with stories and poems from  from The Knotsman,

Katy Darby reads her short story, The Tyburn Jig, from our anthology Five by Five, read at Writing the Past, our event for Hither Green Festival 2019 at Manor House Library. This was our 18th/19th century contribution.

Kate Foley reading from both her collections, The Don’t Touch Garden, and A Gift of Rivers at our Writing the Past event for Hither Green Festival at Manor House Library on Saturday.

Kate is next reading at Fourth Friday, at the Poetry Cafe,Betterton Street London, this Friday

Still got room for more Eurovision? Here’s a story set around the 1970 competition: The Bet, by Joan Taylor-Rowan from our anthology Five by Five, read on Saturday at Writing the Past, our event for the Hither Green Festival 2019

We are once again taking part in the lovely Hither Green Festival (they ask us, this is so rare, and so good for the ego!)

at one of our favourite venues, 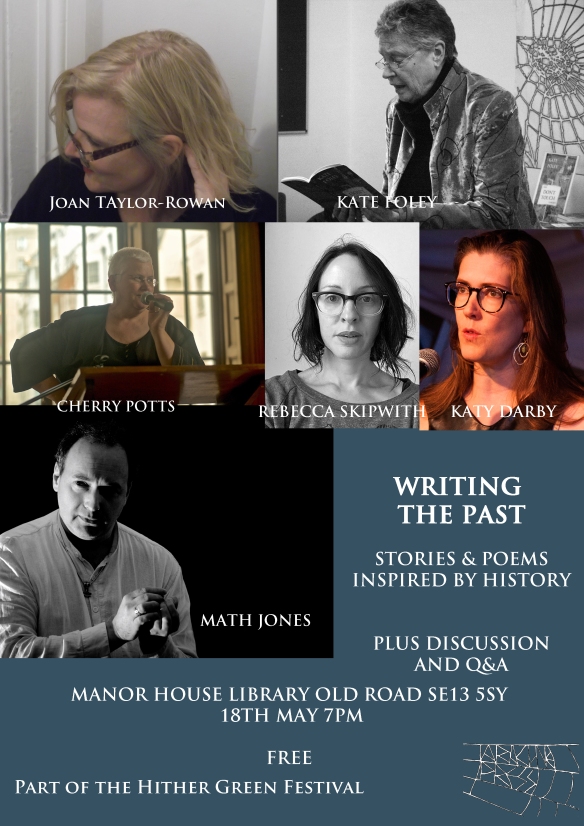 Readings of stories and poems based in the past – from the 17th to the 20th Century – life stories and imagined lives, followed by a fairly short discussion about writing from history – what inspired the piece, what research was needed, how was the story shaped by the facts and which got in the way – that sort of thing.

Kate Foley will read from her two poetry collections of personal history, spanning adoption and WWI to coming out as a lesbian in the second half of the 20th Century, The Don’t Touch Garden and A Gift of Rivers

Math Jones will read from his recently published complex narrative made up of poems of imagined folkloric history set in the English Civil War, The Knotsman.

Joan Taylor-Rowan will read her short story The Bet about an incident during the Troubles in Northern Ireland.

Rebecca Skipwith will read her short story Surplus Women set just after WWI, from the anthology An Outbreak of Peace

Katy Darby will read her story The Tyburn Jig set in the early 18th Century from the anthology Five by Five.

As part of our Hither Green Festival event, Women & SF/F, Katy Darby reads from Quarantine which is in our forthcoming anthology Five by Five (July).

After this the video conked out, so you missed out on We/She by J. A. Hopper and The Real McCoy by Cherry Potts, both coming up in the anthology We/She (August).

Cherry Potts reads her very first published story (Fantasy, of course), Penelope is No Longer Waiting which is in Mosaic of Air.

Part of our Women & SF/F event for Hither Green Festival.

Having discussed what we grew up reading, here’s a bit from one of Cherry’s early influences, her mum, Ghillian Potts. This is a section from Spellbinder, the middle book of the trilogy The Naming of Brook Storyteller.

The final installment, Wolftalker, is out on 7th June!

Cherry first read these books in her teens, and did a critique of them in her twenties, which was largely ignored!

More from our Women & SciFi/Fantasy evening for Hither Green Festival.

The audience put in their comments and recommendations. Call out for Naomi Novik and the Temeraire series