Our final posting from Midsummer Night in the Garden.

Katy Darby & Cliff Chapman introduce the song Little Tricks, with a scene from As You Like It.

And so, Good Night!: Cliff signs off.

If you have enjoyed the videos of this event, you might like to sign up for our newsletter to find out when our next live readings are, or when our latest book hits the shelves.

It cannot have escaped the notice of most people that it is 400 years since Shakespeare  shuffled off this mortal coil. There’s been a lot of celebrating, and not to be outdone, we are joining in, not on his birthday, not on his death day, but at Midsummer. You know how we like a solstice.

The nice people at Lewisham Libraries are hosting us for an event on Tuesday 21st June at 7:30 on the front lawn of Manor House Library Old Road, SE13 5SY (with performances on the front steps) or inside in the Baring room if the weather is unseasonable.   Please  phone the library on  0208 314 7794 to book a place, and to book a seat  for those who genuinely need one. You are encouraged to bring a picnic blanket to spread on the lawn. (If it rains we will be inside)

Shakespeare’s great skill was in telling an old story in a new way, so we are shamelessly tearing a leaf from his folio. We have poetry, story, and song, based on Shakespeare’s own work, the characters he invented, and his life.
Songs from Raise the Roof and from Rachel Bellman and Elizabeth Charlesworth performed by Rosalyn Miller, Toby Hine and Mark Wainwright.

Poems from Pat Tompkins, Alison Absolute, Shakespeare himself, Kim Russell, Sarah Lawson, Elinor Brooks and Jennifer A McGowan, a story from Lucy Ribchester, and from Carolyn Eden,  an award-winning sketch based on A Midsummer Night’s Dream.

For the sketch and where the author can’t make it, we have actors: Big thanks to Katy Darby, Carrie Cohen,  Saul Reichlin, Cliff Chapman and Mike Eden
Discover what’s in a name, what you get when (almost) the complete works of Mr Shakespeare are reduced to Haiku, five of Shakespeare’s women get their own poem, as does his mother, Juliet’s neighbour makes a complaint, one of Shakespeare’s sonnets gets turned on its head, the Illyria of Twelfth Night resurfaces in a story of modern-day refugees and find out where (and from whom) young Will stole his best lines. Oh and what Rosalind and Orlando’s wooing sounds like set to music.

We are crowdfunding to pay the performers. If you would like to contribute you can do so here. 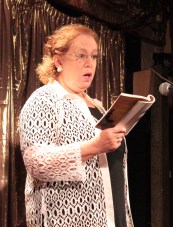